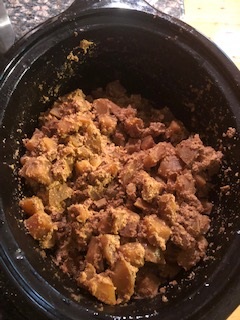 This very simple, unprocessed, 4 ingredient potato recipe was in my family since I was very young. I never did hear what the name of it was, or whether it even had a name. My first time trying it as a kid all I remember is that the flavor was unlike anything I’d ever tasted. We LOVED potatoes in my household.

Any kind of potato would do. Baked, fried, mashed, mashed then refried in the morning for breakfast, new potatoes, au gratin, German potato salad. You name it, we’d eat just about any potato dish in my household growing up! Granted, my mom was Irish and my dad of Austrian German heritage, but both loved potatoes and it was always a welcome side dish.

The Most Simple Potato Dish

So when my grandma brought over a dish we’d never tried before, little did we know that it would become a family staple for years to come. We would forget about it as adults and then my sister and I would talk about it and how we used to love it. I tried to duplicate it many years ago and completely botched it. But I think I’ve finally figured it out again and will never make those same mistakes!

This is the simplest recipe you will probably ever see for a potato side dish. It literally can be made with 4 ingredients. It just takes a lot of time. You will cook this dish in your slow cooker, on low, for almost 24 hours. Skimping on cook time can yield a more watery consistency, and doesn’t give the same full effect of essentially creating your own thickened sauce over time – with an almost cheese curd like consistency.

I sometimes wondered if this recipe was an acquired taste. Maybe our family just loved it because we loved anything made with potatoes. And the rich ingredients used really you couldn’t go wrong with. But I have a feeling a lot of others would like it. It’s just really different. Organic wasn't a "thing" in our family when I was young, so using organic half and half I think just makes it all that much better. If you've ever had organic half and half in your coffee versus non-organic, then you know there is a huge taste difference between the two!

And it’s so simple that it’s a welcome departure from the best-known modern recipes for potato casseroles that used canned soups and other highly processed ingredients. Don’t get me wrong, I love Velveeta cheese and creamy canned soups, but they are highly processed foods and have little nutritional value. I think that’s why I really like this dish. It’s old fashioned, and made with real, whole, unprocessed ingredients that speak for themselves. Sometimes, less is more! Related: Trans Fats - Addictive and Destructive to Overall Health

Crock Pot Half & Half Potatoes

One large container of half and half, preferably organic, plus one small container

Salt and pepper to taste

Cut up the potatoes into small cubes about ½ inch in diameter. Add them to the crock pot. I like coating my crock pot in a nonstick cooking spray. It helps cut down on the cleanup. The long cook time does tend to produce some crusty situations on the sides of the pot that can be difficult to clean without nonstick cooking spray.

Use Enough Half and Half to Get a Good Saucy Outcome

Chop the hard boiled egg up and add to the mixture. Salt and pepper well. Turn the crock pot on low and let them cook overnight until they have been cooking for anywhere from 18 to 24 hours. You will know when they’re done by the thickness of the sauces and the tenderness of the potatoes. Fair warning – the potatoes do turn brown as they cook. This is totally normal and expected.

Also optional if you’d like a little more zest and flavor, you can add some chopped onion to the mixture as well, or onion or garlic powder. This dish is very unique tasting. I’d never tasted anything like it as a kid, and never did since as an adult either.

Let's face it, the end result as shown in the picture isn't all that appealing looking, so if you’d like to make this dish more presentable to take somewhere, then you can put the potatoes in a greased 9X16 baking pan and crumble potato chips (not the rippled kind) over them to form a “crust”. You can then put them in a 350 degree over to brown the chips if it needs to be heated again.

This method of presentation hides the somewhat odd-looking browned potatoes from view and makes it look a lot more appetizing to people who might shy away from something that looks different from what they’re used to. Need a little help digesting dairy? Read this related post about the benefits of the bromelain enzyme in pineapple. Just one of its amazing benefits is the ability to break down fats, protein and dairy in the digestive tract.